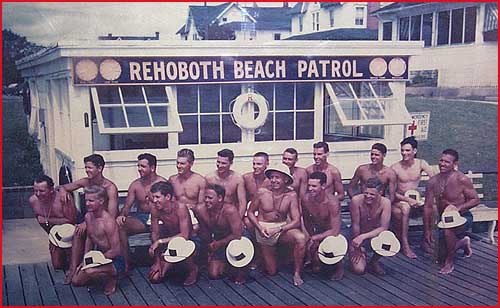 Since its founding in 1921, the Rehoboth Beach Patrol has enjoyed a proud history rich in tradition and excellence. The following is a sketch of that history. These photographs, some dating back to the 1920’s are displayed in the RBP headquarters. To view these photographs or contribute items to the collection, please contact RBP headquarters, or contact us.

Founded by Benjamin F. Shaw and the Red Cross with a total of 2 guards.

Captain Frank Coveleski introduces the lieutenant system. With 2 miles of beach divided into 4 sections, each supervised by a lieutenant. Total of 17 guards.

New beach patrol headquarters built at Baltimore Ave. and the Boardwalk, with a complete First-Aid facility. Total of 23 guards.

Beach expansion on north and south ends. Total of 30 guards.

Our Lifeguard of the Year is no surprise to most, congratulations to Hunter McFalls

We’d like to congratulate and recognize Colin Fuchslager as this year’s Rookie of the Year.